ActiveJet is a brand of sporting emotions

The Euro 2016 Championships are over. It will remain in our memories due to the historical achievements of our national team. Although intense emotions are still present after the Sunday final game, we are in for even more excitement tomorrow, as the 73rd edition of the Tour de Pologne is beginning. This year's race, which the largest and the most prestigious cycling event in Poland, will see competition of as many as 25 teams from various countries worldwide. The VERVA ActiveJet Pro Cycling Team will be among them.

From the concept to the Tour de Pologne

The creation of a professional cycling team was the original idea of Piotr Bieliński, chairman of the board of directors in ACTION S.A. and an enthusiast of cycling. The group has been established in 2003 as the Professional Cycling Group ACTION. Over the years, the group has been constantly progressing by taking part in cycling tournaments of increasing importance. In 2014, as ActiveJet Team, the club initiated a cooperation with a the Copernicus Cycling Academy, which resulted in creating a School Cycling Club. A year later the group acquired a new sponsor, a company belonging to the Orlen Capital Group, and was the second team in Poland to advance to the Professional Continental group, which has given the team an opportunity to compete in prestigious cycling events in the world, and as for ActiveJet, it meant excellent brand exposure in the prime time of broadcasting studios in Poland and Europe.

As Rafał Ornowski, ACTION S.A. Management Board's Representative for the ActiveJet brand explains, "it is widely known that the sponsorship of sports is an added value of each brand. The most prominent players from various industries invest in sponsorship, as it brings a long-term profit in brand awareness and positive image. It is the companies that go beyond being narrowly focused on the quality and development of their products and reach for unconventional marketing strategies that become market leaders. Just as ActiveJet, which as the only one in the industry that has bet so much on sponsoring sports, and has gained so much in return.
According to a research held by an independent company, the sponsorship of the Legia Warszawa Football Club alone is going to have a huge impact on our brand up that will benefit from it well until 2018, in spite of the fact that the sponsorship contract ended three years ago. The Tour de Pologne, as the most recognizable media event, presents yet another opportunity for ActiveJet to increase the brand's popularity. Suffice to say that the tournament will be broadcast for 23 hours in 54 countries and will be viewed by some 3 million supporters on the course and 301 million viewers on television.

"We keep introducing new products. Apart from the printing supplies, we have an interesting array of lighting and power products. I firmly believe our sponsorship of sports can be a great aid to retailers, as it effectively helps them to enter new market areas not only with ActiveJet inkjet cartridges and toner cartridges, but also with our lighting and power products" Mr Ornowski added. 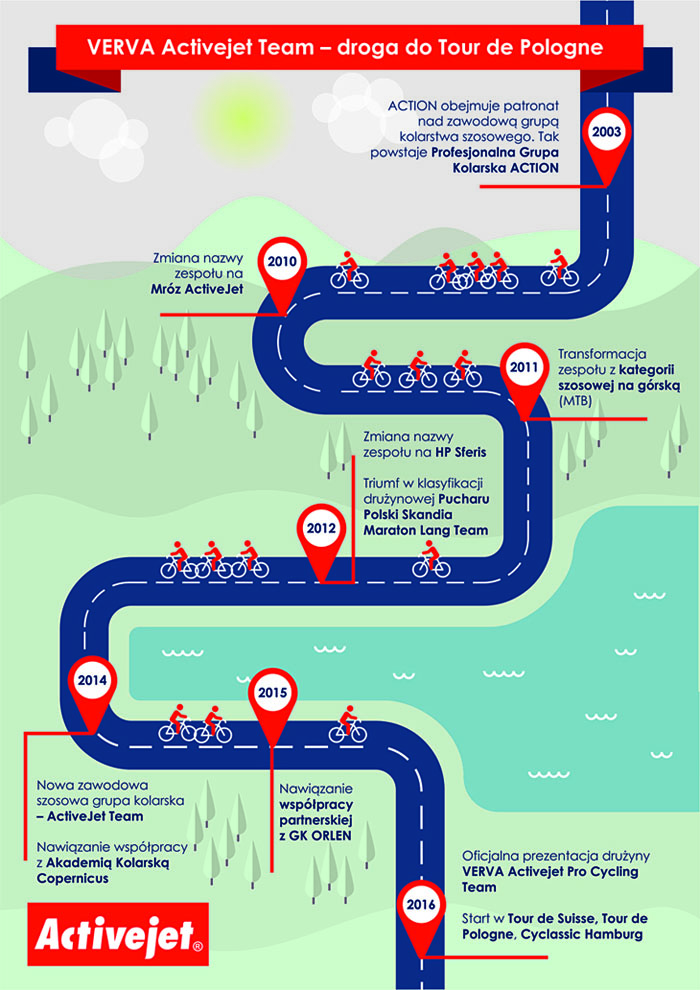